You met my Amazing Cover Artiste, Silviya Yordanova (@Morteque on DeviantArt.com), in my last post: 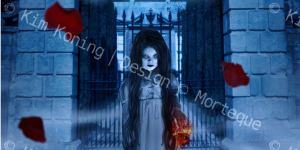 A Paranormal Historical – Book 1 in The Cursed Trilogy

Between what we know

and what we fear to believe…

A woman who speaks to the dead

does not believe in Ghosts

Both women have the Gift

One accepts the Gift

but denies the Truth

One denies the Gift

but seeks the Truth

The Secret of the Past

brings revenge to the House

“A gust of wind swept over it and a rush of heavy black wings lifted from the chimneys.
The Ravens kept their silence, roosting in their nests, a court of jesters wearing the colours of mourning.
Their eyes missed no secrets and their wings shadowed them with darkness. Every night they took flight.
Their wings of coal like liquid night.
They hunted while the living slept.
Their prey did not hear them until the talons of fate caught up in their fur.
Death came swift and silently.
It was dressed in feathered robes of black.
Its talons gloved in the jeweled ruby tones of life.
As the dawn sky cracked open the night, death flew home to savour the sweet taste of life in its talons.
It landed on the cold gray stone.
It watched as the night leaked into soft light.
The song it sang farewelled the night of death with a haunting cry.
It watched over them.
Its dark gray stone walls were cemented with their secrets.
Shadows stood veiled in its windows.
It breathed slowly and ominously.
The walls would not give up the blood of their despair.
The windows shuttered the grey of their shame.
The doors kept the dead and living captive.
It was their keeper: this court of stone.
They called it The Raven’s Court.”